Coaching StaffNameAgeDoBRoleStart Attend Date Dave Martinez 55us US Sep 26, 1964ManagerJul 23Sep 27 Tim Boar 53us US Oct 28, 1966BenchJul 23 Kevin Long 53us US Dec 30, 1966HittingJul 23 Pat Koestler UnknownHittingJul 23 Jim Hickey 58us US Oct 12, 1961PitchingJul 23 Henry Blanco 48ve VE Aug 29, 1971BullpenJul 23 Randy Knorr 51us USNO 12, 1968First Base Jul 23 Bob Henley 47us US Jan 30, 1973Third Base Jul 23NameAgeDoBRoleStart Attend Date The acquisition of Josh Bell, in a Christmas Eve deal with the Pittsburgh Pirates, gave the WashingtonNationals the sort of middle-of-the-lineup bat they were after this off season, but, GM Mike Rizzo explained after the trade was announced, there is still plenty of work before Spring Training starts.

“This is a big upgrade for us,” Rizzo told reporters of the addition of Bell on a Zoom call late last month, “... and like I said, middle of the lineup presence that we’ve been looking for. The addition of Bell, as MLB Network insider Jon Heyman noted on Twitter in a December 29th post, was not necessarily the last middle of the lineup-type bat that Rizzo and Co. were going to add this winter.

“We’ve got three great strong starting pitchers coming back,” with righties Max Scherzo and Stephen Strasbourg, and lefty Patrick Corbin up top. But that doesn’t mean they won’t address pitching needs in the rotation and bullpen after adding pitchers like Sam Clay, Joan Avon, Steven Fuentes, Rogelio Renters, Matthew Merrill, and Luis Avian to the mix.

With the 2020 season in the books and Opening Day ‘21 about five months away, let’s take a look at who could make up the Nationals roster next year. This group is likely to look different from seasons past, with key players from the 2019 World Series championship squad becoming free agents.

The Nationals roster also will be impacted by whether the universal designated hitter rule is implemented again next year. He is a free agent mulling whether he wants to retire or play in his 16th season, and he would be a fit for Washington if there was a DH role again.

While the off season has just begun and there're months ahead for the 26-man roster to take shape, here is an early projection of the Nat's' 2021 Opening Day squad. The Nationals have the luxury of depth at this position -- a proven veteran in the final year of his contract and an emerging young talent who already got a crash course on Major League competition. 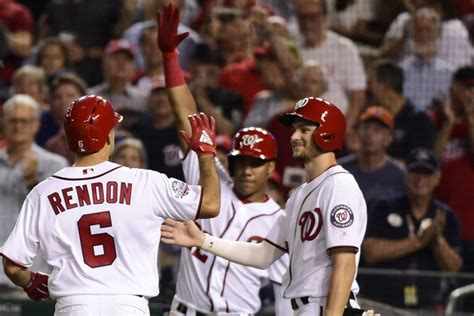 Kaboom shared the hot corner with Cabrera (a free agent), and he spent time developing at the alternate training site during the year. While the Nat's weigh that decision, adding another veteran to platoon or back up third would give them options throughout the season.

Turner, 27, was lauded in his sixth season by manager Dave Martinez for embracing the role as a team leader. That’s not even to say the returning players will defend the same position next season -- the Nat's took a look this year at Soto in right field.

4 and 5 spots, where Anibal Sánchez became a free agent and Austin Both struggled in his first year as a starter. Relievers (7): Daniel Hudson, Will Harris, Tanner Rainy, Wander Suer, Kyle Finnegan, Erick Edge and Austin Both A taxed bullpen would get two arms back if Edge and Both return to reliever roles in 2021, and this list reflects those under contract for next season.

With Sean Doolittle becoming a free agent, watch for Rainy to see even more late innings, especially as Martinez has described the 27-year-old right-hander as “potentially our future closer.” Spots on the Opening Day roster will be competitive, though. In addition to options in the free-agent/trade market, the Nationals have pitchers in their system who made cases for Major League playing time this season, including No.