Ancient Green warden is a new elemental creature that really cares about lands in graveyards, and it synergizes perfectly with Nair's Lithoforming, another card in ZendikarRising. One of the best new solutions for this combo is the LIDAR Retreat enchantment, which creates a 2/2 cat token for each land entering the battlefield. 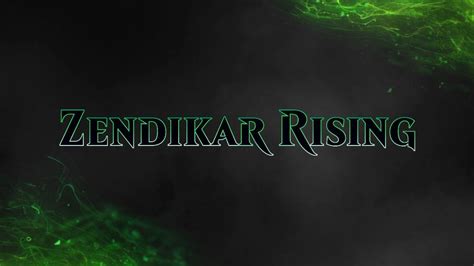 It appears this flying Merfolk creature will be a force to be reckoned with in all blue decks this season. Since The Monolith and the Conclave Mentor are included in standard, you could easily find a way to turn Grammar into a monster card that never leaves the battlefield.

Grammar also synergizes well with the mutate mechanic, and the legendary rule in this case helps your board state. Either way, Grammar, Slave Ravager will find its way into any Golgi or Asian decks this season, especially those that care about counters.

Nair, Heir of the Ancients is a new planes walker without a passive ability, and since this card has a very specific focus, many players will most likely skip over it. Nair's second ability plays an important role for players who run the warrior creature Wino ta, Joiner of Forces.

Saline Tyrant allows you to build up red MANA quickly, attacking your opponent for 4 damage in the air while doing it. There is also an Ironclad Feat spell that can quickly add an extra 3 red manas to Saline Tyrant's pool, which practically equates to a free Lightning Bolt.

But aggro decks with burn spells can easily turn this creature into a huge threat for just 2 manas. Expect to see Scourge of the Slaves in Red Black Aggro decks and lists that utilize Lucius of the Dream-Den companion.

Moral, Fury of About is the perfect top-end card for Gruel decks in the vein of Carnage Tyrant. With it, you will have enough time to build up your board before playing Moral, and then you will have two sequential attacks that have the possibility of dealing lethal damage.

If you also run Mirror Gallery in your deck, you can create copies of Uithoorn Engine using its third ability. Thankfully, Wizards of the Coast printed Feed the Swarm, which allows all black commander players to stand a chance against Rest In Peace, Ground Seal, and Saline of the Void enchantments.

The Landfall ability for Math, Locus of Creation is pretty spectacular, but it does stop after the fourth land drops. If your opponent can't remove it before the sixth land drop, then you're essentially assured victory.

Assay can be combined with the Storage Matrix artifact, which allows you to uncap one type of permanent card on the battlefield. Malaria Rebirth is another useful black spell that immediately brings back one of your creatures from the dead.

Alongside Parameter, LIDAR has the potential to make your board grow fast, both vertically and horizontally, using its two Landfall abilities. Slave Relic may not be the best of the existing MANA producing artifacts, but it is indestructible, which makes it increasingly useful.

Mono Red players will definitely want a copy of Value Awakening in their decks because it can relieve MANA flood. Lastly, you can simply combine Value Awakening with The Locust God commander and produce a whole army of insect tokens.

Colossus Hammer and Ember cleave weapons will be put to a good use with Akira, Fearless Voyager, making any equipped creature indestructible. Ta borax and Athens, God of Passage commander can be combined to gain power by sacrificing creatures.

You can then use Faith's Reward, Immortal Servitude, and Rally the Ancestors spells to bring back all the dead creatures from your graveyard and repeat the process. Oral, Slave Heartfelt is another card that could be added to the Athens mix, but it can also serve well as a commander in its own right.

It can be used alongside Ta borax, as well as other new cards from ZendikarRising, such as Angel of Destiny and Cleric of Life's Bond. For more Magic: The Gathering content, card lists, and guides, head over to our MTG hub page here.

Wizards of the Coast have introduced both new mechanics and commanders in the latest ZendikarRising set for Magic: The Gathering. Most of the cards that will see play from this set won’t spawn new archetypes or alter the landscape of eternal formats, but rather reinforce the options available to you as a deck builder and player.

In terms of Pioneer and Modern, there are several criteria it needs to pass to join the ranks alongside Fatal Push and Lightning Bolt. Aside from that, it’s a decently flexible tool to have in your arsenal, particularly for Pioneer, which tends to be slightly slower than Modern.

A couple of copies could easily show up in some grind Random Romancer decks in Pioneer, and it could even see similar use in Modern. Wrench Mind, Unearth, and Eliminate may all be better at their individual functions, but a jack of all trades is often better than a master of one.

The real kicker here (pun intended) is that this is an incredible late-game card, particularly in grind match-ups; a single spell that can tear apart your opponent’s hand, remove a threat, and return a Young Romancer or Dread horde Organist can be back-breaking. As a Twiddle Storm player, I’ve cast more than my fair share of Peer Through Depths.

Slave Cleric may not be the best anti-aggro card we’ve ever seen, but the land on its backside means that it’ll still be effective in slower games. Similar effects have shown up in decks on occasion, either to protect a key creature from removal or to take advantage of sacrifice/death triggers.

This can feel awful from a play experience perspective, but Siri Shelter may help to go forward. I expect to see a couple copies in decks like Orzo Humans or Azores Spirits in Pioneer, even as a sideboard card.

You take out a land, then capitalize on your opponent’s tempo loss by deploying a massive threat to close the game quickly. It’s not meant to cause a huge tempo loss à la Stone Rain, but rather to knock your opponent off just enough to take advantage.

The dream scenario is using this as a Sinkhole that can trips, though even knocking an opponent off a color or denying them a utility land without losing a card is still a very decent play. In many situations, a card with a playable spell on one side and a passable land on the other becomes much greater than the sum of its parts.

There’s an increasing pressure to add more lands to decks; this helps guarantee that you can cast your haymakers on time, lest you risk falling behind. Apart from sniping low-loyalty planes walkers, it can permanently deal with Dark Confidant, Young Romancer, Noble Hierarchy, Bloodiest, Thalia, Guardian of Threaten, and Brazen Borrower, to name a few.

It’s also worth noting that this can hit Pro, Titan of Nature’s Wrath while its sacrifice trigger is still on the stack, so it’ll get exiled instead! I wouldn’t usually include the rare cycle of lands from a set in my evaluations, as their power should be obvious, but it seems many people don’t believe they’re wonderful.

They will be a mainstay of Pioneer at the very least, and will serve as excellent additions to budget man abases in Modern. Between the new affordable dual lands and many of the modal double-faced cards, the added flexibility should ultimately translate to more wins for us budget players.

Whether you’re looking to ration your hard-earned treasure during these tumultuous times, or you’re on a quest to brew the best build for your buck, I’m sure you’ll find something of value in ZendikarRising. When he’s not writing about his favorite decks, he can be found talking incessantly about them on Twitter and on The Budget Magic Cast.

Kitchen ZendikarRising drops for paper Magic: The Gathering on Sept. 25, it will bring with it 280 cards with the vast majority being brand new to the game. There is also the RPG-inspired party mechanic, which vaguely resembles the ally tribal strategy from previous Zanzibar sets.

We think it’s great that it can exile nonland/token permanent with MANA cost four or less (bye bye T3feri) upon ETB, and we don’t mind that it essentially turns that card into an X/X vanilla token creature (X = the exiled card’s MANA cost) for your opponent upon death. After all, if a 1/1-4/4 vanilla token creature for your opponent would make or break the game for you, then you probably already have bigger issues to deal with.

Then again, there’s nothing wrong with a card that could be really neat in multiplayer formats such as Commander, Oath breaker, or (insert eye roll here) Brawl. Such is the case with Soul Shatter, a three-drop (2B) instant that forces each opponent to sacrifice whichever creature or planes walker they control has the highest converted MANA cost.

It has flying, death touch, and lifeline just like the original, but this time around its power is equal to one plus the number of card types in all opponents’ graveyards (which is very Tarmogoyf-ish). First off is its Crucible of Worlds / Ramona Excavator ability that lets its controller play lands from their graveyard.

Plus, it’s a key piece of synergy for the card Acute Swarm (which we’ll talk about shortly). It should also reduce the deck’s chances for failure as it helps players locate their Primeval Titan and fire off successfully more often than not.

A not-too-shabby eight-card milling sorcery for two (1U), players can choose to toss in a 3U kicker to turn it into a Traumatize. Nearly literally, in fact, as the kicker raises the total cost to 4UU (which is one generic MANA more than the original) for the same effect.

While this card’s 2/1 body is underwhelming, if it’s being played as a body then the player is probably already in trouble as the only draw here (and it’s a big one) is its enter-the-battlefield ability to copy the next instant or sorcery (max converted MANA cost of two) one to two times depending on whether it was kicked. Furthermore, the Storm caller only cares about the card’s MANA cost, meaning that kicker, buyback, etc.

Roiling Vortex (assuming it doesn’t get countered) is an answer to that as it essentially add the text “you take 5 damage” to any of those spells. Don’t be surprised if you see this main decked and/or side boarded in Legacy burn in place of Sulfuric Vortex.

More often than not, that’s exactly what Magmatic Channeler will be as it is likely to be an inclusion in red aggro, midrange, and burn builds. This artifact is essentially a Roku of Two Reflections coupled with a pseudo- Towns, Ursa’s Apprentice.

Its life gain ability is important against burn and other aggro strategies, its MANA generation is very useful, and its ability to get rid of planes walkers while also knocking your opponents down by a fifth of their starting life at a time can be almost too much for many players to handle more than a couple of times.