It seems hard to imagine, but there was a time when a Saturday Night Live -based film was an uncommon occurrence. How about a combination of the earnest charm exuded by Mike Myers and Dana Carved, and all of these totally excellent quotes. 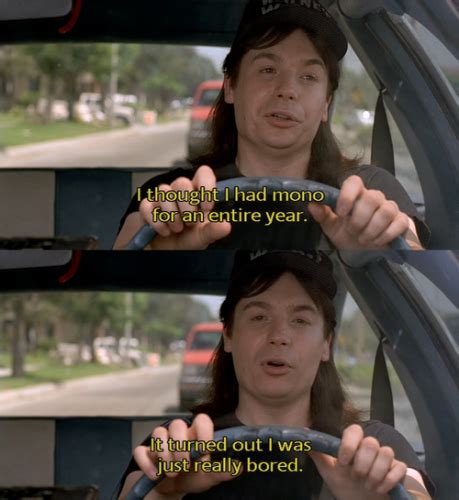 Early on, Wayne Campbell addresses the audience with this endearing, yet seemingly unrealistic expectation that foreshadows the movie’s plot. As Wayne gives the audience a kind of guided tour through the celebrated nightlife of his suburban home, the first stop is Stan Nikita’s donuts, where he and his friends run into his ex-girlfriend, Stacy (played by Lara Flynn Boyle).

Stacy approaches their table after some unintended eye contact where she presents him with an anniversary gift, two months after their breakup. When Wayne’s best friend and co-host Garth Altar asks a question that’s hilariously uncomfortable, the scene feels like it could have been a snapshot of any ridiculous moment between any two friends as they hang out on the hood of their car, the Mirth mobile, while staring deeply into the night sky to innocently ponder life’s grand (and… less than grand) mysteries.

While being held at flashlight-point, Garth tries to convince Russell to question his allegiance, calling him ‘Benjamin’s Monkey Boy.’ When Russell pushes back, stating that Benjamin is his friend, Garth offers these helpful words that cause him to defect to the side of our heroes and help save the day. When Garth asks him if these types of gestures are leading to intentions of marriage, Wayne quickly shoots the notion down.

While a seemingly random interjection, a key element to the humor that was carried over from the original Saturday Night Live sketches were these occasional allusions to Garth’s genius level intelligence, breaking him out of the standard side-kick mold he was often relegated to. It’s a simple setup and punchline joke delivered in a quick and unassuming manner that makes it so effective.

The kind of joke that utilizes a type of offbeat humor that isn’t quite cringe-worthy in its awkwardness, but plays off the silence in its own margins. A genuinely romantic scene that’s almost out-of-place finds Wayne seemingly on top of the world as he’s able to do what he loves for a living, lying around with Cassandra as he predicts his own meteoric rise and fall. 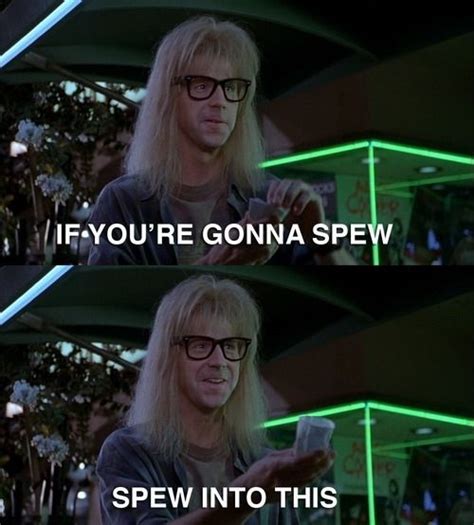 Another example of the kind of subversive humor that migrated from the small screen, Wayne’s World guest stars would regularly break into a brief but well-informed lecture casually. In this case, rock legend Alice Cooper’s delightfully enthusiastic lesson on the history of Milwaukee.

A long-celebrated line that’s developed an iconic status in its own right, as Wayne begins the opening notes from a certain Led Zeppelin song while at a guitar shop he’s abruptly stopped before being alerted to their strict policy. Nikita's Manager Glen:(bitterly) Yeah, I know what you'd like to do: find the guy that did it, rip his still-beating heart out, and hold it in his face, so he can see how black it is before he dies.

But Wayne’s World is easily the most quotable film of 1992 (unless, of course, you count singing along with Sister Act as “quoting”). Coming a dozen years after the success of The Blues Brothers, Wayne’s World was only the second feature film spin-off of a Saturday Night Live sketch.

By all accounts, Wayne’s World was a success of its own: it raked in over $180 million in worldwide receipts on a modest $20 million budget, and propelled Canada’s Mike Myers to movie stardom. It was such a hit that it led to not only a sequel, but a string of SNL -inspired films in the 90s, none of which posted with audiences the way Wayne’s World had (and some of which were unmitigated box office disasters). 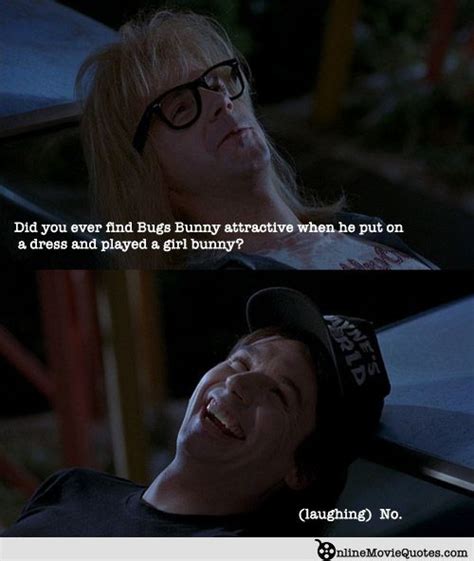 Much of the magic of Wayne’s World is thanks to its script by Myers and SNL husband-and-wife writing team (and later creators of That ‘70s Show and 3rd Rock from the Sun) Bonnie and Terry Turner. Its combination of slacker-comedy, irreverence, and zeitgeist defining references helped make it highly re-watchable, ensuring we’d still be quoting it almost 25 years later.

It evolved from a segment titled “Wayne's Power Minute” (1987) on the CBC Television series It's Only Rock & Roll, as the main character first appeared in that show. The Saturday Night Live sketch spawned a hit 1992 film, its 1993 sequel, and several catchphrases which have since entered the pop-culture lexicon.

PG-13 (Parental Guidance Suggested) Year: 1992 9411,859 Views You'd like to find the guy who did it, rip his still beating heart out of his chest and hold it in front of his face, so he can see how black it is before he dies.

Benjamin Kane: Listen, we need to have a talk about Vanderhoff. The fact is, he's the sponsor, and you signed a contract guaranteeing him certain concessions, one of them being a spot on the show.

Benjamin: Sorry you feel that way, but basically, it's the nature of the beast. Wayne: Maybe I'm wrong on this one, but for me, the beast doesn't include selling out.

( Benjamin: Look, you can stay here in the big-leagues and play by the rules, or you can go back to the farm club in Aurora.

The French missionaries and explorers were coming here as early as the late 1600s to trade with the Native Americans. Cooper: I think one of the most interesting aspects of Milwaukee is the fact that it's the only major American city to have ever elected three socialist mayors.

Wayne (Mike Myers) & Garth (Dana Carved) are two rock-and-roll-loving guys from Aurora, Illinois (Which is a suburb of Chicago, Excellent!) Who host a late-night public access show from the basement of Wayne's parents' house.

When TV exec Ben Kane (Rob Lowe) decides to PAY them to do their show on a regular network, they quicky agree. It is based around a struggling Heavy Metal Cable show of the same name, and Aerosmith concerts, especially the sequel.

At Famous- Quotes -and-Quotations.com, you'll find 'Top 10' lists -- the best of the best -- in lots of famous quotations categories. Instead, you'll find our personal, well-organized 'Top Ten' Favorite Famous Quotes lists -- in all sorts of categories (with more coming every week).

In the eyes of children, they are all 30 feet tall. Larry Wilde, The Merry Book of Christmas. Favorite Famous Quotes #12 Peace on earth will come to stay, When we live Christmas every day.

No matter what language we speak, what color we are, the form of our politics or the expression of our love and our faith, music proves: We are the same.” Discover the finest leadership quotes from our Top 10 List of Favorites -- they'll inspire you to greatness.