The wily detective and his faithful friend, Dr John Watson, have pounded the pavements of pop-culture for over a century, and their popularity shows no signs of slowing down. The intricately plotted tales and compelling characters have captured the hearts of millions of readers and viewers, but it's the quick wit and amazing quotes of Sherlock & Watson that have proved to be the main draw. 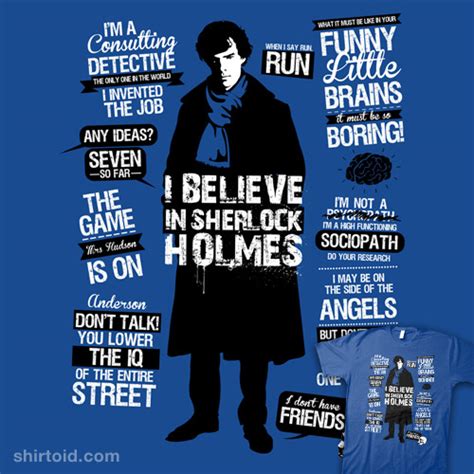 When they aren’t hailing hansom carriages and ending evil plots, Holmes and Watson can be found having snippy and meditative conversations. “...when you have eliminated the impossible, whatever remains, however improbable, must be the truth...” Indeed, these kinds of exchanges have continued throughout their many incarnations.

John’s stubborn insistence that Sherlock’s opinion didn’t sway him (it clearly did) results in some teasing from Mary (Amanda Abingdon), who can’t help but make fun of him. Though Lestrade (Rupert Graves) is one of Sherlock’s closest companions, when a little girl screams at the mere sight of the famous sleuth, he can’t let an opportunity for ribaldry pass him by.

Indeed, apart from extroverted super villains and shadowy organizations, there are several instances where dead characters are revealed to be still alive. Clearly this is business as usual for people like Irene Adler (the compelling Lara Puller), which is demonstrated by her cool and nonchalant sarcasm.

Wild, garrulous and absolutely dangerous, Moriarty (the brilliant #Andrew Scott) is fully aware of just who he is and what he role he plays in Sherlock, without ever breaking the fourth wall. Certainly, the featured quote says everything about the show’s main antagonist: his lack of inhibitions, through to his intelligence, his manipulating nature, his designs on positions of power, and of course his flamboyance, which contrasts with the very uptight Sherlock.

One of Sherlock’s greatest talents is that he is able to notice the things that no one else can, and rather fittingly, #StephenMoffat and Mark Gates’s deft writing mimics its protagonist’s proficiency. Mrs Hudson may be referring to Sherlock’s unusual tastes and tendencies, but the quote could easily be applied to us as well. 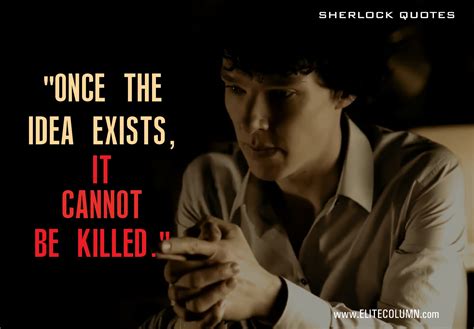 Certainly, we all take a lot of enjoyment from crime dramas, thrillers and action movies which very often involve homicide, so in a way, we’re no different from a certain consulting detective! And it’s a great instance of Anderson-bashing: a hilarious hobby of Holmes’s which sadly diminished as the series progressed.

“The Lying Detective” mulls heavily on the themes of grief and death, but these words encapsulate everything about the importance and preciousness of life. Here Sherlock reminds us to consider that, if we’re feeling down and contemplating ending it all, there’s always something or someone worth living for, as well as someone or something who’ll suffer if you go through with it.

Though Sherlock quickly discards his shock blanket soon after he evades Lestrade’s questions, he does have an attachment to quilts of all kinds. A few episodes after this one we find him in Buckingham Palace wearing an only a bedsheet, and Sherlock is also seen taking refuge in his covers following his drugging at the hands of Irene Adler (Lara Puller).

It becomes very clear throughout Sherlock that the shadowy Mycroft is essentially a nastier version of the titular detective. Lazier, shadier, though no less dramatic, Mycroft lets a series of icy threats fly against Sherlock’s fans in a particularly mean yet bad-ass moment nonetheless.

Once you've opened your heart, you can't close it again.” Culvert on Smith (Toby Jones) may only get one episode to shine, but he leaves a potent and lasting impression as a sadistic and repulsive individual who uses his power and influence to go on a killing spree. But it’s his sickening logic, and his insight into human interactions which make him a villain formidable enough to verbally spar with our favorite detective. 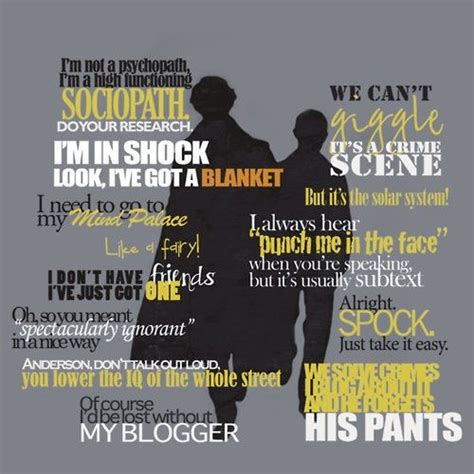 It may be a quote that doesn’t necessarily scream that it’s from this particular series, but it’s from a rather lovely, overlooked moment in the show. Two years after faking his death, Sherlock returns to London and unveils himself to John, and in this case, Lestrade.

It’s a perfect delivery from Rupert Graves, and a fitting reaction for this fan-favorite character, showcasing his annoyance and his happiness at his friend’s wily rug pull. Mrs Hudson is another beloved character, who is a surprisingly kick-ass mother figure to the Baker Street Boys.

Hoping to discuss John’s upcoming nuptials, Mrs Hudson tries to offer some friendly advice. So, like Lestrade, when odd moments like this crop up, John is ready to fire back at his firm -yet highly irritating- friend.

The brilliance of Sir Arthur Conan Doyle writing is that, for all of Sherlock Holmes’s superhuman qualities, he is painted as a flawed and very human character. Here, Sherlock acknowledges that his icy demeanor doesn’t conform to our ideas of heroism, but ultimately he sells himself short.

Therefore, it is upon the logic rather than upon the crime that you should dwell.” Sir Arthur Conan Doyle, The Adventure of the Copper Beeches Watson's summary list of Sherlock Holmes's strengths and weaknesses:”1. 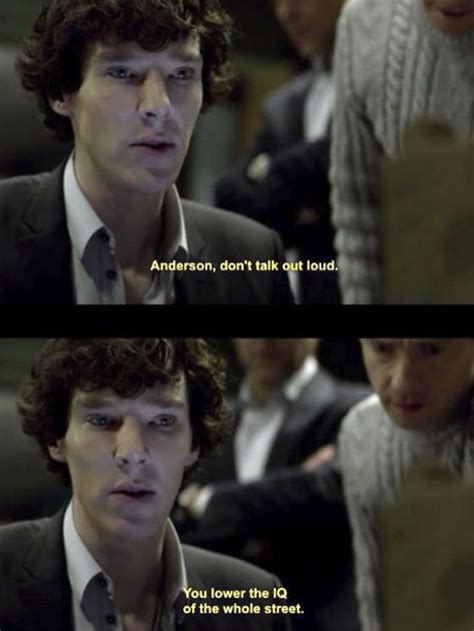 Horologically, I deduce that the time is approximately a quarter past three. The clear, hard eyes were dimmed for a moment, and the firm lips were shaking.