Whilst Benedict Cumberbatch's portrayal of Sherlock is interesting on many levels it is his many deductions, both arbitrary and important, that make the character and show what it is. He stuns his potential housemate, John Watson, into silence by asking him whether he has served in Afghanistan or Iraq.

The ways in which he deduces these things is, in typical Sherlock style, brilliant in the simplicity of it. This tells Sherlock that he has recently been abroad but working not on holiday.

His stance as he entered the room and his mannerisms tell Sherlock that he is a military man and this leads to 'Afghanistan or Iraq', for example. The mistake only serves to make Sherlock seem vaguely human and this scene is one of the most striking character introductions in TV.

It hurts my eyes... 20-year-old student with too much time on my hands. Aspiring journalist and passionate about all things film and television related.

Detective Sherlock Holmes and his stalwart partner Watson engages in a battle of wits and brawn with a nemesis whose plot is a threat to all of England. Sherlock Holmes and Dr Watson solve the mysteries of copper beeches, a Greek interpreter, the Norwood builder, a resident patient, the red-headed league, and one final problem.

To treat his friend's cocaine induced delusions, Watson lures Sherlock Holmes to Sigmund Freud. Sherlock Holmes investigates the murders committed by Jack the Ripper and discovers a conspiracy to protect the killer. 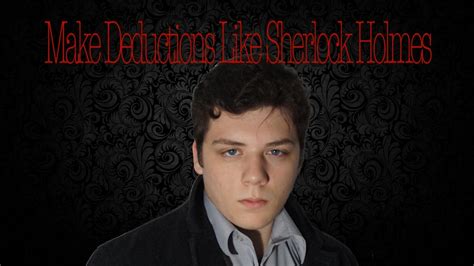 Sherlock Holmes comes to the aid of his friend Henry Baskerville, who is under a family curse and menaced by a demonic dog that prowls the bogs near his estate and murders people. Hired by a young lady, Sherlock Holmes and Dr. Watson investigate the strange recent deaths of her missing father's friends from the army, as well as the whereabouts of the Great Mogul, the second-largest diamond in the world.

Certain events which had an impact on Sir Arthur Conan Doyle, while he was still a medical student under the supervision of Dr. Bell, his teacher and mentor, on whom the character of Sherlock Holmes is partly drawn from. When a bored Holmes eagerly takes the case of Gabrielle Valley after an attempt on her life, the search for her missing husband leads to Loch Ness and the legendary monster.

Sherlock Holmes investigates the case of a string of mysterious deaths with no apparent causes and the case of a missing German Prince that could cause war between England and Germany. A modern update finds the famous sleuth and his doctor partner solving crime in 21st century London.

When a Nazi saboteur jeeringly predicts to the nation new depredations via the radio 'Voice of Terror', the Homeland Security Inner Council summons Sherlock Holmes (Basil Rathbone) to help ... See full summary ». Sherlock Holmes sets out to discover why a trio of murderous villains, including a dangerously attractive female, are desperate to obtain three unassuming and inexpensive little music boxes.

When the fabled Star of Rhodesia diamond is stolen on a London to Edinburgh train and the son of its owner is murdered, Sherlock Holmes must discover which of his suspicious fellow passengers is responsible. Holmes is recruited to escort the heir to a European throne safely back to his homeland after his father's assassination.

Sherlock Holmes investigates a series of deaths at a castle with each foretold by the delivery of orange pips to the victims. He knows the female villain behind them is as cunning as Moriarty and as venomous as a spider.

Doctor Watson moves in with the eccentric SherlockHolmes, and they get a case to solve. A young heiress seeks Holmes help when she feels threatened by her brutish stepfather after her sister dies under mysterious circumstances.

Dr. Watson executes Sherlock Holmes will, who faced death after exposing Moriarty and his gang in the previous episode. Mycroft Holmes hands Sherlock Holmes the case of the Master Blackmailer.

After upsetting the criminal underground in 'the Master Blackmailer' case, Sherlock Holmes has to face his archenemy: Prof. Moriarty. Retired Sherlock Holmes and practicing Dr. Watson come back together to solve a puzzle in the beginning of the 20th century.

Detective Sherlock Holmes is on the trail of criminal mastermind Professor Moriarty, who is carrying out a string of random crimes across Europe. A modern take on the cases of Sherlock Holmes, with the detective now living in New York City.

An antisocial maverick doctor who specializes in diagnostic medicine does whatever it takes to solve puzzling cases that come his way using his crack team of doctors and his wits. I am a hard core fan of the original Sherlock Holmes written by the legendary Sir ACD.

Whilst Benedict Cumberbatch's portrayal of Sherlock is interesting on many levels it is his many deductions, both arbitrary and important, that make the character and show what it is. Almost nothing can escape the cool logic and sharp observational skills of literature's most famous detective.

You can find yourself insensibly twisting them round to suit your theories. We approached the case, you remember, with an absolutely blank mind, which is always an advantage.

“I had,” he said, “come to an entirely erroneous conclusion, my dear Watson, how dangerous it is always to reason from insufficient data.” “They say that genius is an infinite capacity for taking pains,” he remarked with a smile.

“Detection is, or ought to be, an exact science, and should be treated in the same cold and unemotional manner.” “It is of the highest importance in the art of detection to be able to recognize, out of a number of facts, which are incidental and which vital.

Then I picked up a magazine from the table and attempted to while away the time with it, while my companion munched silently at his toast. One of the articles had a pencil mark at the heading, and I naturally began to run my eye through it.

Its somewhat ambitious title was “The Book of Life,” and it attempted to show how much an observant man might learn by an accurate and systematic examination of all that came in his way. The reasoning was close and intense, but the deductions appeared to me to be far-fetched and exaggerated.

The writer claimed by a momentary expression, a twitch of a muscle or a glance of an eye, to fathom a man’s inmost thoughts. Deceit, according to him, was an impossibility in the case of one trained to observation and analysis.

So startling would his results appear to the uninitiated that until they learned the processes by which he had arrived at them, they might well consider him as a necromancer. “From a drop of water,” said the writer, “a logician could infer the possibility of an Atlantic or a Niagara without having seen or heard of one or the other.

So all life is a great chain, the nature of which is known whenever we are shown a single link of it. Like all other arts, the Science of Deduction and Analysis is one which can only be acquired by long and patient study nor is lifelong enough to allow any mortal to attain the highest possible perfection in it.

Before turning to those moral and mental aspects of the matter which present the greatest difficulties, let the enquirer begin by mastering more elementary problems. Let him, on meeting a fellow-mortal, learn at a glance to distinguish the history of the man, and the trade or profession to which he belongs.

“Why, this article,” I said, pointing at it with my egg spoon as I sat down to my breakfast. It is evidently the theory of some arm-chair lounger who evolves all these neat little paradoxes in the seclusion of his own study.

They lay all the evidence before me, and I am generally able, by the help of my knowledge of the history of crime, to set them straight. All quotes on this website were written by Sir Arthur Conan Doyle unless otherwise stated.