They read them or watch television series or films about the famous men and women who practice this profession. Sherlock Holmes : master detective, violinist, all around wise guy, and probably known to everyone. 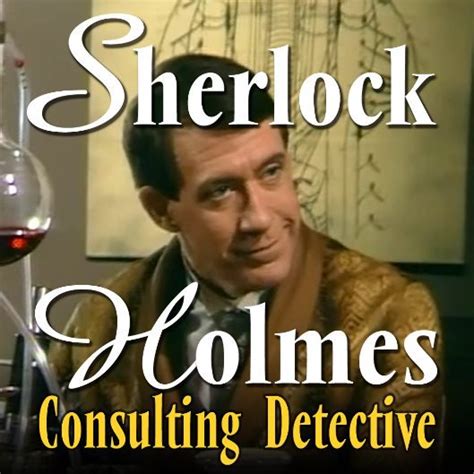 You read the newspaper of the day, or earlier, and search for some clues. You look up the address of the victim in the directory, and then you must find that location, indicated by a number and direction (e.a.

Every location has its own chapter in the book, so while you are travelling through the City of London, every time you visit a location, you have to read a small piece of text. Now, Sherlock is going to tell you exactly how things happened and how many leads he had to follow to get to this result.

You, as a group, can discuss where to go, but eventually the lead investigator decides where to go. When every player has done that, you can check the solution together and score points individually.

No cube pushing, no rolling dice for damage. It’s you alone or you and your mates, staring from the map of London to today’s newspaper.

This is a very challenging game ; some cases more than others, but Sherlock is not beaten easily. You answer them correctly, and you’ll get one hundred points. 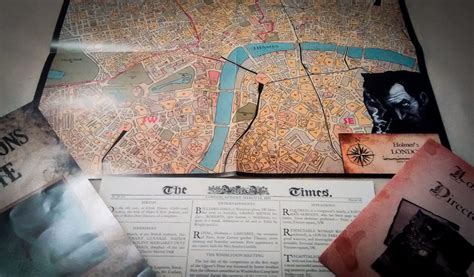 And then there are a few extra questions that concern things that are not necessarily related to the case. Mostly these last questions can only be answered when you’ve wandered of the path that Sherlock Holmes followed, so although you can earn more than a hundred points from these questions, it probably means that you’ve used more leads than Holmes and therefore lose points in this way.

What happened months ago can have an impact on the actions of people today. I play this game once a month and probably even less, so I don’t remember all the tiny details of the previous cases.

Theme: You do feel like a detective in Victorian England, with your map, your notebook and your old newspapers. The story is well written and this makes it much easier to dive into the world of Sherlock Holmes.

The fact that this game had a lot of reprints speaks for itself, because a storytelling game without a great theme won’t draw a lot of people to it. The map looks good and the few illustrations in the books are nice and add flavor to the game.

Fun: Imagine yourself, with or without your friends, sitting at a table; candles lit, a Christmas tree in the background, with a glass of whiskey, reading a great story: a murder mystery. Solving a murder case was never so involved, you have to do all the work yourself, there’s no guy with a mustache doing all the thinking for you.

In addition, you can immerse yourself in this brilliant world that is Victorian England. You talk to all these colorful characters and at the end you’ll probably find that you were completely wrong about them, Charles the gardener was not the killer, Frederick Goo sebum, the well-known boxer, was.

You rub the back of your head and think: ‘Who in Santa’s name is Frederick Goo sebum…?? With fewer players you still have the feeling that you have an impact on the path that is being taken.

I like the world, I like the story and I think solving a murder mystery is really fun. You will remember a lot, not all pieces of information, but the grand picture will stick with you.

However, during the game, I was starting to make all kind of assumptions, subconsciously and consciously, on pieces of information I did not have yet and that ruins the experience. I mean, six hundred minutes of fun detective work sounds like my money’s well worth.

The decision is in your hands and each clue that you follow will bring you a step closer to the truth. Unravel the string of intrigue, answer a series of questions and compare your score to that of Sherlock Holmes.

You can enter the opium den beneath the Bar of Gold, but beware, that may be Colonel Sebastian Moran lurking around the corner. You can capture the mystery and excitement of Holmes London in this challenging and informative game.

Find the best deal for the board game Sherlock. Check out our video review: Getting’ Ziggy with Sherlock Holmes : ConsultingDetective.

With a new map of London and Whitechapel district, new newspapers for every case, and ten new casebooks, it's time to put your mind to the test! A “London Directory”, map, and newspaper archives are included with the cases. Included are six independent “West End Adventures” cases (redesigned and updated from the 1995 expansion), and a series of four new cases based on the Jack the Ripper murders.

Session date: April 22, 2016, Players: Scott, An, Derek, Karen Result: We solved the case, getting only one question wrong! SherlockHolmesConsultingDetective : Jack the Ripper & West End Adventures is a standalone expansion to SherlockHolmesConsultingDetective with updated graphics that features ten more cases to be solved in Sherlock Holmes Victorian-era London, England.

A woman’s remains are found in the newly excavated foundation of what will become the New Scotland Yard. The missing painting of a dead woman leads to the unraveling of a devious conspiracy.

But believe me my friends if you meet above requirements you will be quite potentially turn down many threats in urban environment. What u have to do is to slightly turn yourself take him above your shoulder and bump him down.

As you can see here cover your face and push your punch back wards and with full force just take it front. The pressure points for the body is given below: just hit creating 45 degrees for any axis shown in the figure.