I feel like Sherlock would have had an easier time of it if he’d just learned to hug sooner. As, arguably, the greatest character in Western literature (although don’t tell Arthur Conan Doyle that…), Sherlock Holmes has had many incarnations.

Unlike any other show of its kind, Sherlock usually presents audiences with three, full feature length episodes, and shortly, it will also have its first theatrical release. The first episode of the second season sees Sherlock matched up against one of his most memorable adversaries from the original Conan Doyle canon, Irene Adler (Lara Puller).

When Adler leaves a phone in his possession that contains numerous state secrets, Sherlock tries to keep it away from those who want to steal it as he also attempts to deduce its passcode. When he returns to his home at 221B Baker Street, he finds the shady Americans he encountered earlier in the episode have kidnapped his landlady, Mrs. Hudson (RNA Stubby) in order to obtain the phone.

John, who is horrified that Mrs. Hudson was hurt and does not understand why Sherlock is so blasé about the issue, insists that she spend some time away from Baker Street to convalesce. When Sherlock is severely frightened after seeing the hound he has come to the mysterious Baskerville military research base to explain away, John strikes out on his own to try to solve a piece of the puzzle.

Very similar to the original novel, A Study in Scarlet, John and Sherlock are introduced to one another by a man named Stamford who believes they could possibly be a good match for roommates. I think I left my riding crop in the mortuary”), its true triumph is the way in which it begins the eventual partnership between these characters, which has fascinated readers and audiences for many years.

It seems he is unlikely to forgive his friend for lying to him for two years and making him believe the worst, but a strategically placed bomb in the London Underground allows them to work out their differences… sort of. Sherlock defuses the bomb with ease but, instead, allows John to believe that he doesn’t know how, apologizing for everything he has done to hurt his friend.

And yes, of course I forgive you.” Of course, that’s right about when the bomb doesn’t go off, allowing Sherlock to get a laugh in and make audiences wonder if John might actually kill the man himself. In addition, Molly Hooper (Louise Really), the long-suffering pathologist who has been in love with Sherlock for years, has a wonderful moment in which she shames him for his heartlessness and is rewarded with one of the few true apologies the character ever bestows.

After going to a pub on every street where they have ever found a corpse (Sherlock’s idea, naturally), they end up back at 221B, lying on the stairs and mumbling. Eventually, they wind up back in their flat playing the Rizal Game (also called “Celebrity Heads, Who Am I?,” and about a thousand other things).

Their bachelor party culminates in a drunken attempt to solve a case for a woman who believes she’s been dating a ghost (which also comes back brilliantly in typical Sherlock fashion) and a night in the drunk tank before Detective Inspector Lestrade (Rupert Graves) comes to fetch them. Sherlock’s swan dive of the building is one of the most incredible shots of the series, cinematically, and the scene is filmed beautifully from beginning to end.

But the dialogue between the two characters coupled with the intensity of the actors' performances makes it the kind of sequence that still causes audiences to tear up just thinking about it. Sherlock, realizing there is only one way he can protect Mary and John, shoots Rasmussen in the head in front of security services and his brother Mycroft (played by actor, writer, and show co-creator Mark Gates).

Brought to the official residence of the British monarch, Sherlock is asked to take on a case that requires the utmost security and tact… but not before he is told that he needs to put his clothes on, as he was dragged from his flat while wearing a bedsheet and nothing else. With Moat having said the fourth season of the show will be a much darker story with serious “consequences” the characters will have to face, it can be enjoyable to look back on the old days when Sherlock’s temper tantrums involved not wanting to get dressed and being kidnapped meant the boys were simply getting to visit one of the most iconic places in the kingdom.

After walking free from a trial where the all the evidence was piled against him, Moriarty teases Sherlock with cryptic phrases and seemingly encoded communication. He basically chews the scenery with lines like, “In a world of locked rooms, the man with the key is king, and honey, you should see me in a crown,” and we loved every minute of it.

The scene then dissolves into a brilliant showcase of Sherlock’s skills and abilities inside his Mind Palace, which had been, until then, only shown in flashes. The Moriarty in his mind laments that Sherlock is letting John down by dying, which is what gives him the strength to, essentially, come back to life.

The cinematography is absolutely breathtaking during this sequence as well, and the entire segment gives us a glance into the mind of the detective, which is one of the most desired insights for Holmes fans of any kind. But the dynamic between John, Sherlock, and Moriarty is clear from the very start, giving the audience the ability to watch three fine actors do what they do best.

It's spooky, it's smart, it accomplishes an old-fashioned, cozy aesthetic whilst combining with a contemporary world that viewers can relate to, it has a great soundtrack. But what sets this particular adaptation of Sir Arthur Conan Doyle's classic books apart from the countless others is the beloved relationship between Sherlock Holmes and John Watson.

The dynamic that this adaptation offers, with Martin Freeman as John and Benedict Cumberbatch as Sherlock, stands out because, simply put, it's actually made to be the centerpiece of the show. The duo is always important, but while the crimes and cleverness of Sherlock are often at the forefront, Sherlock chose to make this slow-burn friendship of these two characters the wholesome focus amidst the backdrop of chaos--and oh, how they succeeded. 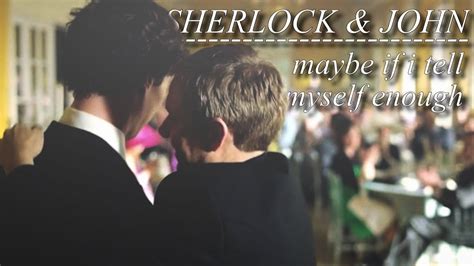 It doesn't take long from when Sherlock and John first meet for them to start forming their own inside jokes. On the first day that John meets Sherlock, he ends up saving his life--or, at least thinks he is.

With the small chance that Sherlock might have listened to the words of the cab driver from A Study In Pink, being manipulated into taking a pill that might have killed him, John instead takes action and shoots the cab driver. John comes off as pretty straight-forward of a person, but in reality, he is quite complicated and unique, just in different ways to Sherlock.

Sherlock vaulting John along onto his dangerous adventures opens up a world of purpose that both men can immerse themselves in together. Other times, knowing someone has faults can actually make the relationship more interesting and intimate, like how Sherlock's callous social behavior entreats John to better understand why Sherlock is how he is, causing their bond to grow stronger.

The most simple and obvious, yet most important part of John and Sherlock's friendship, is the fact that they truly love each other. And while Sherlock series 4 may premiere this Christmas, it doesn’t make the wait any easier.

The moor location allowed the story to be taken outside of London, and offered some gorgeous visual opportunities for the audience. But John’s fear and Sherlock’s self-doubt made this episode what it was, creating a mystery that was genuinely scary, rather than just tense. 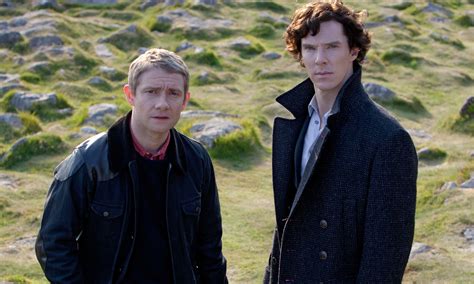 This episode was about Sherlock and John attempting to rekindle their friendship, and it provided a great jumping off point for the remainder of the series. Sherlock Holmes is a hard nut to crack in every iteration of the character, but Benedict Cumberbatch takes the character to new heights of complexity in the Sherlock adaptation of Sir Arthur Conan Doyle's classic novels.

What's so special about Cumberbatch's Sherlock Holmes is that, while he certainly holds up the iconic reputation of being a cold and calculated detective, he also delves into self-exposing moments where he really shows his hand emotionally, revealing to viewers that Sherlock Holmes indeed has a soft side--even if he can be blatantly heartless much of the time. Molly's instantly obvious crush on Sherlock is the perfect thing to throw his complete obliviousness and habitual rudeness into the light, and fans feel deeply sorry for her when Sherlock interprets her request as an offer to simply make him coffee, not a date.

It's not one particular time in the show that Sherlock displays absolute excitement in the face of a new murder mystery, but rather, several. It doesn't matter how many people tell him that his behavior is considered despicable by the common person- Sherlock knows his enthusiasm aids him in solving crimes, so he allows himself to be openly gleeful, even if it means disturbing those around him.

It's a hilarious scene when at the end of The Hound Of Baskerville Sherlock is revealed to have been the one playing fake dog noises into the speaker of the lab John is hiding in, cowering away from a hallucinatory hound that Sherlock is working to convince him is real. The next day, Sherlock tries to jump back into acting as they usually do, trying to pretend nothing happened--but John won't have it.

Sherlock's reaction to The Woman dying (supposedly) gives viewers a glimpse into his romantic side. He shares a special connection with The Woman, one that shocks viewers who, until that point, weren't aware he could be romantically attached. 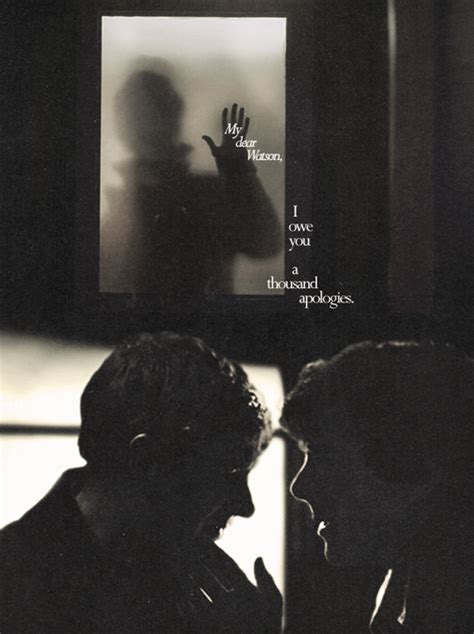 After all, doesn't it feel like just yesterday that Jed Bartlett was leading the country, Donna and Josh were a constant “will they, won't they,” and C.J. For fans of the show, it doesn't matter that it's not airing in a prime time network TV slot; they know the truth about The West Wing.

Learned that her bodyguard (and possible romantic interest) Simon Donovan had been killed in a robbery, the song came on, and it made for a beautiful, poignant moment. “Noel” is one of The West Wing's best episodes ever, for so many reasons: Josh's PTSD, the end-of-year setting, and, of course, Yo-Yo Ma's performance at the White House Christmas party.

The cellist's song choice was gorgeous and haunting, and all the more so for the effect it had on Josh; having recently recovered from the shooting, the sounds of the music sent him into a panic, and made him truly confront his PTSD for the first time since the attack. The West Wing's all-time best musical moment came in the form of “The Jackal,” a song hilariously, and memorably, performed by C.J.

Janna's performance is so beloved that she's done it again, lip-synching the song during a 2013 appearance on The Arsenic Hall Show, much to fans' delight.