Ava is tasting freedom for the first time in her young life after being liberated from an abusive orphanage and a prison of her mind and body. Ava was a quadriplegic for twelve years, orphaned at the age of 7 when her mother died in a car accident involving them both.

Nothing is revealed about her father other than that “he is not in the picture,” and that they didn't have any family in Spain, where she and her mother were on holiday. She was taken in by St. Michael's Orphanage, where it is shown in various flashbacks that she was mentally and verbally abused by her caretaker, Sister Frances.

According to Ava's file, written by her caretaker Sister Frances, Ava committed suicide by overdosing on painkillers , however, it is later revealed near the end of episode 4 that the overdose was administered by Sister Frances. During the first episode, A sister places the Halo artifact inside the corpse of 19-year-old Ava to keep it protected.

Being chased by targets the Surgeon goes into a room and inserts the Halo into Ava's dead body. Standing she sees a screeching man possessed by a demon who's trying to kill her, but she picks up the Halo-holder and hits him into ash.

On the street 3 men approaches her, and she vomits on one of them, while she apologizes to him a truck hits her, and she phases into a wall of a soccer clothing store. She walks to the orphanage and sneaks in to see Diego who thought that it was a dream that she was there, and she tells him that she is really there, alive and different.

She disappears before Sister Frances and Father Vincent enter the room. Back on the streets from the beach, she sees a demon wandering and follows it.

In the morning, goes on someone's property and jumps into the pool realizing that she can't swim. After she told JC, Chanel, Randall and Lori that some people are looking for her, he offers her to stay a few nights.

JC joins her on the beach and tells her about his mother dying of cancer. Inside JC tells her to looks sharp and dances with her, while dancing he made a guard trip and motioned for Ava to steal his access card to let Chanel, Randall and Lori in from the back exit.

Walking back to the party she sees a wheelchair with a neural net in on of the rooms and she and JC ride through the hallway. The Nuns come to her rescue and the Tar ask go back into its realm when she throws a divinity artifact at it.

She tries to runaway from the Nuns and Father Vincent and Sister Beatrice injects her with something to sleep. The Halo reacts to her emotions and begins high-pitched ringing and phase through the bed.

With the Halo high-pitched ringing growing louder, she releases a shock wave blasting herself, Beatrice and Lilith to the walls. With all the information, she asks him to take the weekend and think things over and walks outside he follows her and tells her that he can't let her leave. 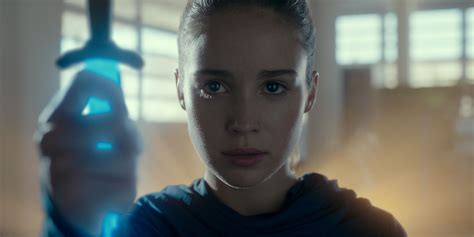 Her first training day, she meets Mother Superior, who tells her that the Halo acts like an amplifier and enhance whatever natural ability she possesses. She tells Mother Superior that she can heal, see demons, pass through things and levitate.

Lilith arrives and tells Mother Superior that she experienced Ava levitate. She isn't paying attention by talking too much and Lilith knocks her off her feet with a stick.

She slides next to Sister Beatrice in the cafeteria, who tells her that life will come along if she didn't treat everything as a joke and says to her that she can't help. Phasing she ends up in the office of Mother Superior with her ankle stuck into the walls.

Lilith comes in the room and shows her that it was a device with vibrating sound, and she realizes that is a test. Mother Superior tells her that she killed herself overdosed on pain medication and Ava denied it.

Mother Superior throws everything written in the file at her and tells her that she is a coward. Walking into Father Vincent's office she meets Shotgun Mary. 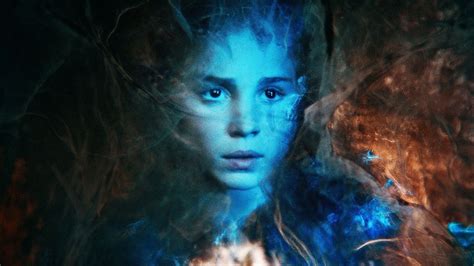 Ava reading the transcript about Areal, a Nun brings Father Vincent some paperwork at the door, and she gets the chance to runaway, leaving him a note saying the wants to live. Back on the streets living her live, she sees a man following a woman and follows them she tries to help the woman, but it is a setup, and they beat her and the man and stab her.

Ava asks them to go, disappear because they are her only friend, but Lori tells her that she's radioactive. Lori and JC get into a heat discussion about her, and she asks them to stop, they just go on, and she releases a shock wave, causing the walls to crack.

Sitting on the wall watching the view, JC approaches her to know how she's doing, she tells him that she's getting by. He asks her if she wants to talk about Jillian Salvos being after her, and she says no then she apologizes for screw up thing for him and his friends and says to him that it was nice knowing him.

Arrived at the Ferry Station, she couldn't leave, because she feels that there is wrong and unfinished. She gets flashbacks of Sister Frances injecting her with some sort of liquid and does the same to Diego, she runs away he follows her, and she tells him to buy tickets and that she trust him leaving him by himself.

At the Orphanage she opens the door and tells Sister Frances who is about to inject Diego to stop. She tells Ava that she lost count over the year of how many children she killed. 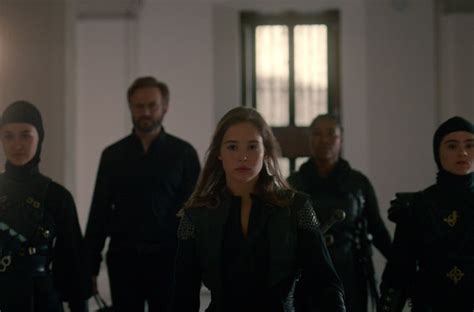 The injection weaken Ava for a few seconds until the Halo begins to glow, and she stands up and chokes Sister Frances to the wall and Sister Frances tries to get out of the choke by trying to take out Ava's eyes, but breaks her neck. She walks through the halls of the orphanage with doubts about killing Sister Frances in self-defense or not.

On the ferry she waves for Mary and Lilith and shows them her middle finger with a smile on her face. He tells her that he wished he was her, because she's seeing something's for the first time, and she takes his hand and begins touching it with her and having a moment.

Ava scared, gasping and crying about what just happened phases through the wall and leaves Mary and JC. Mary hands her a divinity knife to cut out the Halo if being her is a burden.

Mary gets up and offers to do it, but Ava card, afraid of grabs her arm and throws her on the ground. In the morning, they end up in a city where OCS spent some time a year ago.

Mary and Ava take a walk and talk about Cardinal Peretti who may have a hand in Sister Shannon's death and trying to consolidate power. They go in a Church and Mary tells her that the priest was one of the persons possessed by a demon. 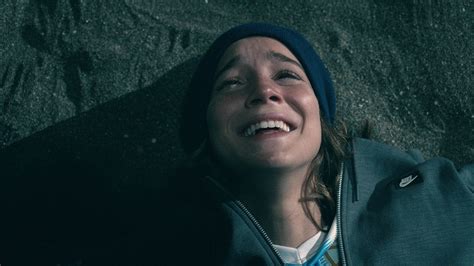 Ava asks him how it was being possessed and tells her that he doesn't remember much, but it felt like being a passenger in his own live. On the streets, Mary says to her to stay on more night and keep an eye on for anything weird and after that she can go wherever she wants to.

Ava walks Mary to her ride and before Mary walks always she gives her the divinity knife and says to her that she hopes Ava finds what she is looking for. Ava is a slim, young Caucasian woman in her late teens, with notably rounded features.

Ava has a very complex personality, she is highly curious, naïve, with very limited experience of life due to her very restricted early life, however, is capable of showing kindness and consideration towards others as shown with JC and Beatrice, as an atheist, she believes that she doesn't have the right to serve God or The Church and can do whatever she wants, therefore is rebellious against the church and their pleads to help them. Shock-Wave: Able to make a shock wave if under enough stress Phase: With the holy relic inside her she is capable of phasing through walls and objects Healing : Ava's body is capable of healing faster than an average person, however, she is vulnerable to Divinity.

She is able to knock a grown man across a room with a single tap and without intending to. The two first met when Ava jumped into a random swimming pool on a residence, then called for help (as she didn't know how to swim); JC appeared out of the house, rescued Ava out of the pool and then fed her at the garden table.

He agrees to let her stay at the villa for a few nights, which he and his acquaintances are borrowing from a rich couple from Saudi Arabia. However, Ava leaves him whilst the two were on the run, when JC witnesses a demon coming to Earth and taking Lilith with it. 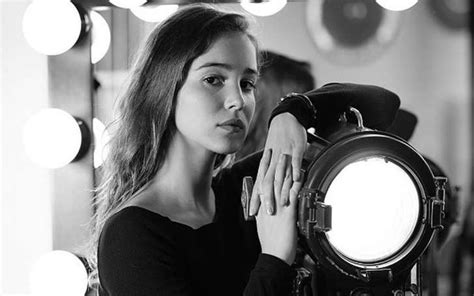 The two really connect when Ava sits next to her during a monastery meal, the two chat about former Halo wielder, Sister Shannon. The next day Ava is reprimanded by Mother Superior, leaving her crying, she speaks and is comforted by Beatrice.

The two grow closer to each other and Beatrice provides emotional and intellectual support, the two also working closely together when they infiltrate the Vatican. Beatrice says that Ava is the first person who does not try to make her something that she is not (Beatrice is a lesbian), in the last episodes, their connection strengthened (with hints towards Ava's bisexuality in future seasons), evident when Ava finally manages to phase through 20 feet of concrete, and Beatrice hugs her.

Mary came across Ava's corpse, when she and the other Nuns were fighting Assassins who eventually murdered her best friend Shannon, just before she died, the halo was removed from Shannon., a nun handled it in a pair of mental sticks and then placed it into Ava's body, it brought her to life. Since then, Mary worked hard to protect Ava and lead her in the way of becoming a warrior nun, despite her refusals.

She also follows and works hard to track Ava down during her rebellious adventure away from the monastery, even paying for a portrait of her and asking people of her whereabouts and sustaining injuries along the way. Despite getting off to a bad start, Ava comes to respect Mary for her strength and bravery.

This, along with the encouragement of Peretti, made Lilith attempt to kill Ava. She fought with Mary many times in trying to kill Ava, but when she finally caught up with Ava and was going to kill her, a Trash 'demon' appeared and took Lilith to 'hell' (it is unclear if Harass are from hell or some other realm). 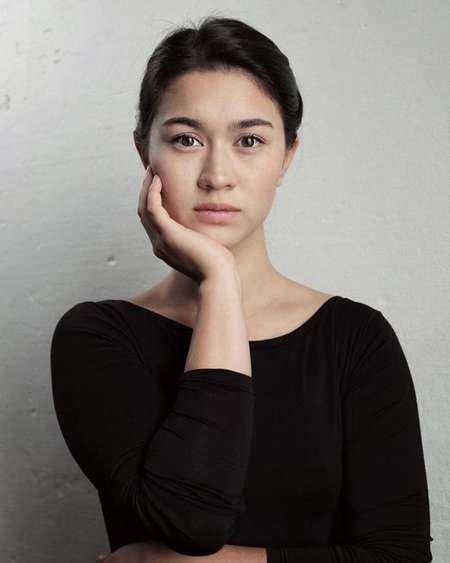