In the novel 1984 by George Orwell, Winston undergoes a metamorphosis of character, which changes his life forever. Then he changes his ideals and becomes true to himself with obvious rebellion towards party principles and standards. 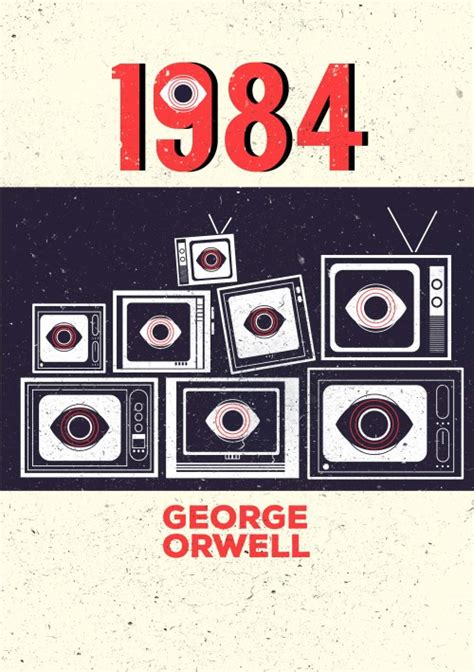 Finally, Winston is brainwashed and is turned against himself and his feelings and is made to love the party. This is a story of perception, and how different it can be from one person to the next. Winston is a miserable member of a society he hates, and is controlled and watched in every area of his life.

Any sound that Winston made, above the level of a very low whisper, would be picked up by it; moreover, so long as he remained within the field of vision which the metal plaque commanded, he could be seen as well as heard. There was of course no way of knowing whether you were being watched at any given moment. How often, or on what system, the Thought Police plugged in on any individual wire was guesswork.

More than anything he wants to be able to have his own thoughts; not just be told what to think, do, and feel. He goes through the motions of outward orthodoxy, but inside he lives in a world of dreams, memories and endless speculation about the existence of the past in the face of the Party’s continual alteration of documents. Winston is devoid of any creativity or “oneness” as a human being, and feels he is being denied the right to live a real life.

Tired of feeling the way he is, with the monotonous struggle of everyday life Winston decides to oppose the party in more real ways; and begins to deviate from certain set behaviors to free himself from this bondage of the party. To the future or to the past, to a time when thought is free, when men are different from one another and do not live alone-to a time when truth exists and what is done cannot be undone”(25-26). He and Julia go to O’Brien’s apartment one afternoon, and Winston’s true hatred is revealed.

Winston’s utter defeat resonates deep in his soul, and the unthinkable has happened, he stopped loving Julia, “true betrayal” (137). Totally broken, brainwashed and reprogrammed, Winston is returned to society as another harmless devotee of Big Brother. 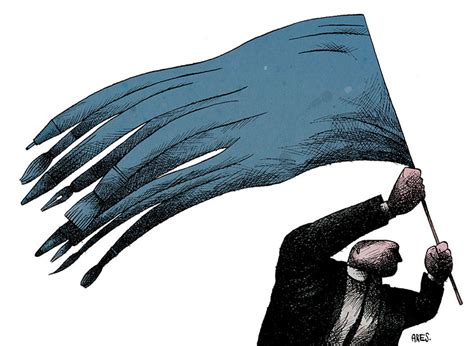 In the chilling final pages of the book, Winston, tears of fear and joy streaming down his face, proclaims his love of Big Brother, all thoughts, hopes or dreams of escape and freedom permanently eradicated from his consciousness. Initially Winston has little to live for, but after he starts his rebellion from the oppressiveness of the state he feels that he should still go on, although already considering himself dead.

Laws against freedom, sex, and individuality are harshly enforced by the Thought Police in order to protect the Party against political rebellion. The reader is first introduced to Oceania's national slogan with a plaque on the Ministry of Truth building where the protagonist Winston is employed.

The slogan's prominence in the first chapter of the book serves as an immediate indicator of the Party's extensive use of propaganda to prevent citizens from applying logic and reaching their own conclusions. In Oceania, there are lots of things that do not make sense, but through propaganda the citizenry have been taught not to question authority.

This phrase war is peace is an example of a Paradox, a contradiction in terms that maintains some semblance of reality. This statement does not seem to make any sense, but in the context of the story, it hides an important truth.

This reality is demonstrated by the fact that the Party is able to unify the people of Oceania by making sure they have a common enemy. In other words, the Party subscribes to the belief that the country as a whole is better off politically as long they are at war with a foreign body. 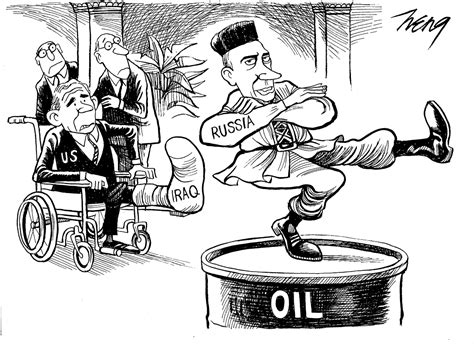 These words make up the national slogan of Oceania and are beautifully etched on public buildings. While war and peace would seem to be contradictory terms, making them an example of paradox, the meaning behind the words is that the Party is the best able to keep its people happy and unified when they have come together against a foreign body.

By spreading propaganda that discourages free thought and portrays war as having a positive outcome, the Party is able to prevent an uprising despite its oppression of the people. On the sixth day of Hate Week it is announced that Oceania is, and has always been, at war with Anastasia, and that Eurasia is an ally.

Winston has to work long hours to rectify all the now obsolete references to Oceania's war with Eurasia. At one rally, the orator actually had to change his speech in the middle, shifting from a diatribe against Eurasia to one against Anastasia.

Winston goes to the room above Mr. Charrington's shop and begins reading the book while he waits for Julia to arrive. Written by Emmanuel Goldstein and titled The Theory and Practice of Oligarchical Collectivism, the book claims that all societies are divided into High (Inner Party), Middle (Outer Party), and Low classes (proles), whose aims are irreconcilable.

Winston turns to Chapter 3, War Is Peace, ” which is a description of the permanent state of war that exists between the three superstates that govern the world: Oceania, created by the absorption of the British Empire by the United States; Eurasia, created when Russia absorbed Europe; and Anastasia, which includes China, Japan, and Mongolia. All three are totalitarian states governed by similar ideological systems (in Oceania, Ingot; in Eurasia, Neo-Bolshevism; in Anastasia, Death-worship).

Rather, the aim of the war is to create fear that makes it seem logical to concentrate power in the hands of the High class, while also distracting the middle and lower classes and keeping them unaware that conditions are the same everywhere and that the terrible things they have been told about the enemy are lies. Reality control is the method by which these states subdue their subjects, through the techniques of doublethink and the falsification of historical documents.

Returning to Chapter 1, “Ignorance Is Strength,” Winston reads that history is a cycle of class struggles. They invented a figurehead named Big Brother to serve as a focus for feelings of love, fear, and reverence.

The Thought Police were appointed to keep a constant watch over Party members for signs of unorthodox opinions and instincts. Elaborate mental training for children was developed that teaches them to avoid unorthodox, and therefore dangerous, thoughts (this is called crime stop).

This section of the book details how the Party stops the cycle of revolutions between middle and high classes, and therefore keeps itself in power, through reality control. The proles, the low class, are ignored because they are not considered to be intelligent enough to recognize their strength or the way that they are being used. 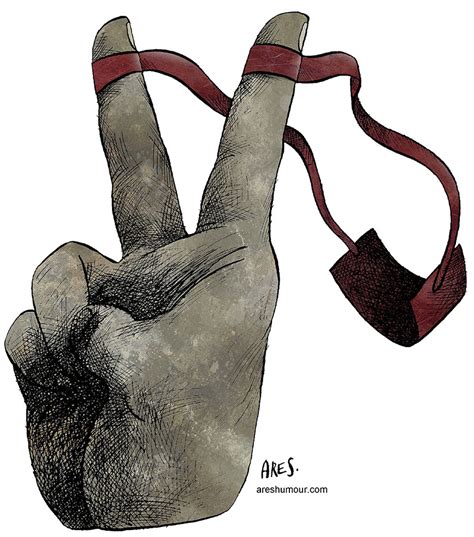 In 1984, War is peace refers to the idea that by placing the nation in a constant state of war, individuals are motivated to ignore their discontent with their government, thus ensuring an unending domestic peace. In Orwell's classic novel 1984, War is Peace, Freedom is Slavery, and Ignorance is Strength are the Party's three paradoxical slogans, which are perfect examples of how the ruling government uses language to manipulate and control the population's thought processes.

Winston gains insight into the meaning of the Party's three slogans when he reads Emmanuel Goldstein's book titled THE THEORY AND PRACTICE OF OLIGARCHICAL COLLECTIVISM. “ War is Peace refers to the way in which the Party uses continual warfare to control and oppress the population.

Oceania is constantly at war with either Eurasia or Anastasia, which cultivates an atmosphere of hysteria, continually bolsters patriotism, and wastes valuable resources and energy that would otherwise be used to increase the standard of living. The result of constant warfare is a fearful, obedient population that is willing to make substantial sacrifices for their country.

In Oceania, individuality is prohibited, and citizens are required to be part of a collective group. Once a citizen embraces the concept of collectivism and views themselves as an integral part of a group, they are considered free by Party standards.

In order to remain omnipotent, the Party suppresses knowledge, censors literature, alters language, and spreads propaganda. These efforts create an ignorant population, and the citizens are unable to recognize their oppressed status or rebel against the government.

This demands a continuous alteration of the past, made possible by the system of thought which really embraces all the rest, and which is known in Newspeak as doublethink. Doublethink is basically the power of holding two contradictory beliefs in one's mind simultaneously, and accepting both of them.

In their society, keeping the masses believing that constant war is being waged is actually a way of maintaining peace. War elicits great patriotism and devotion to country; it also promotes sacrifice and giving to the community over oneself.

The people probably believe that to mean that having total freedom is actually a way to become enslaved to your senses, weaknesses and vices. For example, the Party encourages young women to remain virtuous and restrict themselves from being romantically involved or sentimental in any way.

To the masses, being ignorant about the true condition of things is actually beneficial, because it helps them to remain happy and optimistic, and thus strong. To the workers within the Party, like Winston, their entire jobs rely on keeping the people ignorant of true facts and statistics.

Essentially, lie to keep the people in the dark, and then the Party--and their jobs--will always be strong. In the end, it all comes down to the Party creating slogans that ensure the continuation of their power and control.

30,000+ book summaries 20% study tools discount Ad-free content PDF downloads 300,000+ answers 5-star customer support These words are the official slogans of the Party, and are inscribed in massive letters on the white pyramid of the Ministry of Truth, as Winston observes in Book One, Chapter I.

That the national slogan of Oceania is equally contradictory is an important testament to the power of the Party’s mass campaign of psychological control. “Ignorance Is Strength” because the inability of the people to recognize these contradictions cements the power of the authoritarian regime.